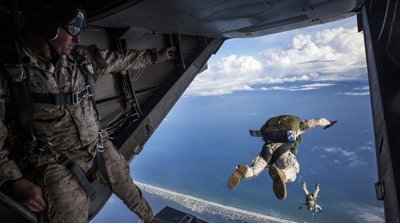 When the US military starts talking about the use of Artificial Intelligence in combat situations, it is difficult not to visualise legions of Hollywood-style, heavily-armed robotic soldiers marching into war. The reality is that AI solutions will play a far less physical and much more integrated role in the future of warfare.

In order to process the inordinate amounts of data and information inevitably produced during maneuvers, the military would realise enormous data-handling and logistics benefits with the use of some form of AI technology. According to recent interviews with Lt. Gen. Wesley of the US Army’s ‘in-house think tank on future war’, Army Futures Command, the ‘hyperactive battlefield of the future’ will need superior logistics and operational management to ensure the right units get the right supplies – as quickly as possible.

Challenges within multi-domain command and control

Modern warfare is changing and supplying troops from a centralised base will no longer be viable in the military maneuvers of the future, according to industry specialists. For some time, with the introduction of longer-range hardware and aircraft, and the development of advanced cyber-technology and processes, it has been understood that the battlefield of the future will need to be much more disparate and widespread to be effective.

Supplying these multi-domain troops is just one of the major challenges currently under discussion, and a new concept, Multi-Domain Operations, is being examined to address the combination of air, land and sea, space and cyberspace into a seamlessly integrated operational platform. Although this is currently possible, the logistics of planning can take weeks for a fully-coordinated, multi-domain operation of relatively small stature against a low-tech opponent.

Concerns are increasing among US military officials, as the use of long-range weaponry is rising. Forward-thinkers realise that the battlefield of the future will be alive with drones searching for targets, but that there will also be sophisticated hacking techniques deployed to interfere with mission-critical communications. Operational agility in near-real-time will be required for future, fast-paced warfare, and experts believe that the answer to this challenge will lie in the development and deployment of AI solutions to handle and process the relentless tide of operational data.

Tackling the logistics of supplying the future battlefield

Historically, the US military has been ahead of the game in terms of logistics and have used large-scale base operations with success for almost two decades. As the adversary’s long-range weaponry, cyber and intelligence technology grow stronger, it has become clear that these days are coming to an end. Large-scale facilities also provide large-scale targets for long-range weapons, and multi-domain battle, or ‘distributed operations’ will become the new norm for combat situations, leaving units scattered and constantly moving, and away from supply lines and secure LOCs (Lines of Communication).

The current military logistics systems won’t be able to keep pace with future operations according to US Army officials, particularly when there is an independent maneuver. A new supply system would need to tackle logistics from a completely different perspective and there are plans under discussion to examine the introduction of some of the principles that commercial companies such as Amazon and UPS are using to deploy and track huge volumes of small orders that each have tailored delivery requirements. Moving beyond a centralized logistics environment is key to the role of AI in future military situations.

Artificial Intelligence is certainly predicted to play an important role in the field of data handling, processing and analysis, but through automation and technology advancements, the use of AI unmanned vehicles could also be part of the field of future combat. Early last year, the US Marines trialled the use of scout drones for logistics, following high volumes of injury and loss sustained by units on supply runs during the Iraqi conflict.

The drones were used to test supply runs and delivered supplies and ammunition on a small scale to users on mobile tablets on the ground. The Marines tested the system by summoning supplies from a central base. Typically, today’s resupply requests carry a turnaround time of approximately 96-hours. The drones completed resupply requests in this way within minutes during the test and demonstrated the potential opportunities of using unmanned vehicles of all types, both on-the-ground and in-the-air, to deliver supplies. It is clear to see how Amazon Prime-style logistics technology could be applied to a military situation to assist with a move away from a complex, conventional centralized system.

Army Futures Command recognizes this potential value and looks upon AI and automation as a significant opportunity to bring flexibility and unprecedented freedoms to military logistics in the future battlefield.

Talk to A-ICE about developing solutions to the individual requirements of military logistics operations. Our experience, knowledge and reputation in Military Transportation Operations has led to the development of the CLOS project – Collaborative Logistics Optimization System. CLOS offers an intuitive, intelligent tool capable of CDM operations, data coordination and promises to be an innovative addition to the future of combat.